The third session at WOD-PD was dedicated to “Bringing (Legacy) Data on the Web“, and led by Sören Auer (University of Leipzig, Germany) and Orri Erling (OpenLink Software) . 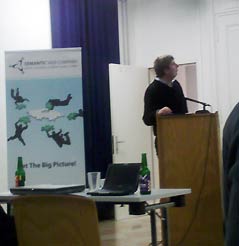 So why would we need another web? What you cannot do with the current web is finding answers to seemingly complex, yet in reality pretty mundane question such as: Where in Leipzig do I find an apartment that is close to bilingual, German-French child care facilities? Are there any ERP service providers which have offices in Vienna and Berlin? Who are the researchers in South-East Asia currently working on database related topics?

Sören further discussed three of the present means of bringing relation data to the web: Triplify (a web application plugin that exposes data from relational databases in RDF), D2RQ (a declarative language to describe mappings between relational database schemata and OWL/RDFS ontologies, developed at Free University Berlin), and Virtuoso Universal Server (a middleware and database engine hybrid delivering for instance data integration for SQL, RDF, XML, Web Services). With respect to Triplify, Sören – who is Triplify’s founder and main developer at AKSW Uni Leipzig – showed and discussed the configuration for WordPress 2.1., which can be found here (click here for more configurations, e.g. for Joomla, OpenConf and Drupal). The next aim for Triplify is to become an integral part in enduser web app distibutions.

And important question raised by Sören was: How do next generation search engines know that something has changed on the web of data? He suggested three approaches:

Also discussed by Sören and worth checking out is Reuters’ Semantic proxy – the demo went live in late September.

Orri Erling, as the lead developer of the Virtuoso Team, addressed the issue of mapping relational databases to RDF with OpenLink Virtuoso. In his talk, he addressed the pros and cons of RDF data warehouse: 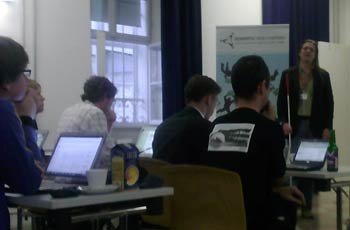 What Virtuoso delivers is mapping of SPARQL to SQL against any existing schema (whether stored in Virtuoso or elsewhere); a physical quad-store (quad as in quadruple; not as in quad-bike:); and Federated/local Relational Data Base Management Systems (RDBMS).

A more detailed discussion of the requirements for Relational-to-RDF Mapping is available on Orri’s blog, where he discusses it in the light of his own experience. A power point presentation of a previous talk he gave to the W3C RDB2RDF Incubator Group can be downloaded here: Mapping Relational Databases to RDF with OpenLink Virtuoso (PPT, 115KB). His summary of the group discussions around the same topic, Requirements for Relational to RDF Mapping, can be found here.

Orri also showed the Virtuoso billion triples demo which, according to the corresponding blogpost, “is being worked on at the time of submission and may be shown online by appointment.” The demo was a submission to the Billion Triples Challenge.