The following blog post was used by Andreas Blumauer as a basis for a talk at TEDxVienna on Monday, November 29, 2010:

Open Data, Open Government, Open Source, Open Innovation – “Open” everywhere. Today I want to talk about another “Open something”: The “Open Intranet”. This might sound a bit radical but it will also help to reflect a little bit on the term “open” in general.

“Open Intranet” – isn´t this a contradiction by definition? What is understood by “Intranet”? It means a network of computers and users “within” some organisational boundaries. But boundaries don´t necessarily have to be closed as nature teaches us: Organisms aren´t closed systems. A watch would be an example for a closed system but living organisms tend to be open – to survive. Of course they aren´t totally open, in systems theory we are talking about systems which are structurally coupled with their medium when we refer to this special kind of openness. As an example, an immune system, having learned to recognise a class of virus it will remain sensitive to that and similar viruses in future. In contrast to this, imagine a fly walking over a painting of Rembrandt: Since the fly isn´t structurally coupled to the cultural space of human aesthetics it is not “open” to the beauty of Rembrandt´s work. 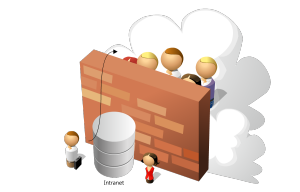 When we think of today´s intranets, we can see that they tend to be isolated from the world wide web, they don´t seem to perceive the internet as their medium. From a user perspective, those two systems aren´t connected to each other. Typically, when working on the intranet we jump from time to time to be in the “internet mode” and start to Google something, we copy it, jump back and paste it into the intranet. It´s the user who is the only part of the whole system connecting the internet with the intranet. Isn´t this exhausting for us?

And now I start with the good news: Intranets all over the world start to open up, slowly – but they do. It seems like the “pressure” from “the outside” just became too huge. In the first instance it seems that it´s not the data and the information which will “break” in, it´s rather the “cool functions” which web apps offer and which we (as digital natives) would like to have in our intranets too. We want:

On the information level intranets are still rather conservative: Typical pieces of information already “injected” from the web into an average intranet would be:

How could companies use the web to inspire their employees (without opening up totally), how could the web “inject” the right amount of information into an intranet to make an enterprise portal as vivid as the web is being perceived by today´s typical end-user. How could this tremendous amount of data and knowledge on the web be “structurally” coupled with intranet repositories and workflows? What are the advantages a company could gain from publishing (at least some) data on the web?

Let me give you a few examples for intranet apps which have started to consume other information than jokes from the web:

Finally I will also give you two examples for use cases where companies expose and publish internal data on the web (without violating privacy) and benefit from it.

To end with a conclusion: What Tim Berners-Lee has demanded in one of his famous TED talks was “raw data now!”. It has started to become reality. Just think of all the “Open Government Data Initiatives” around the globe which were initiated since then. Now companies with a “Web DNA” have started to understand the value of open data and to contribute their “5 cents” to the global “open data cloud”. I think this will not only be of value for many companies but also will increase tremendously the chances to resolve some global problems in the near future.