Traditional KOSs include a broad range of system types from term lists to classification systems and thesauri. These organization systems vary in functional purpose and semantic expressivity. Most of these traditional KOSs were developed in a print and library environment. They have been used to control the vocabulary used when indexing and searching a specific product, such as a bibliographic database, or when organizing a physical collection such as a library (Hodge et al. 2000).

KOS in the era of the Web

“a common ontology defines the vocabulary with which queries and assertions are exchanged among agents” based on “ontological commitments to use the shared vocabulary in a coherent and consistent manner.”

From a technological perspective ontologies function as integration layer for semantically interlinked concepts with the purpose to improve the machine-readability of the underlying knowledge model. Ontologies leverage interoperability from a syntactic to a semantic level for the purpose of knowledge sharing. According to Hodge et al. (2003)

“semantic tools emphasize the ability of the computer to process the KOS against a body of text, rather than support the human indexer or trained searcher. These tools are intended for use in the broader, more uncontrolled context of the Web to support information discovery by a larger community of interest or by Web users in general.” (Hodge et al. 2003)

In other words ontologies are being considered valuable to classifying web information in that they aid in enhancing interoperability – bringing together resources from multiple sources (Saumure & Shiri 2008, p. 657).

Which KOS serves your needs?

Schaffert et al. (2005) introduce a model to classify ontologies balong their scope, acceptance and expressivity, as can be seen in the figure below. 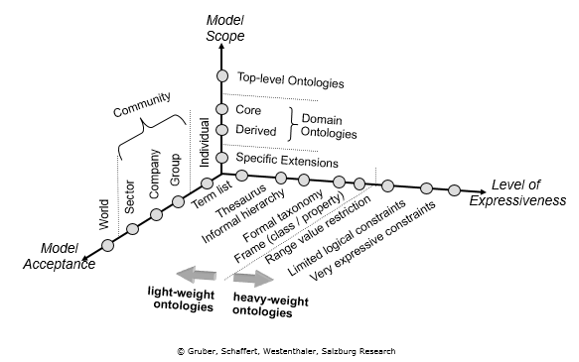 According to this model the design of KOSs has to take account of the user group (acceptance model), the nature and abstraction level of knowledge to be represented (model scope) and the adequate formalism to represent knowledge for specific intellectual purposes (level of expressiveness). Although the proposed classification leaves room for discussion, it can help to distinguish various KOSs from each other and gain a better insight into the architecture of functionally and semantically intertwined KOSs. This is especially important under conditions of interoperability.

[1] It must be critically noted that the inflationary usage of the term “ontology” often in neglect of its philosophical roots has not necessarily contributed to a clarification of the concept itself. A detailed discussion of this matter is beyond the scope of this post. In this paper the author refers to Gruber’s (1993a) definition of ontology as “an explicit specification of a conceptualization”, which is commonly being referred to in artificial intelligence research.

The next post will look at trends inknowledge organization before and after the emergence of the world wide web.

Go to the previous post:Thoughts on KOS (Part1): Getting to grips with “semantic” interoperability

Gruber, Thomas R. (1993). Toward Principles for the Design of Ontologies Used for Knowledge Sharing. In International Journal Human-Computer Studies 43, pp. 907-928.