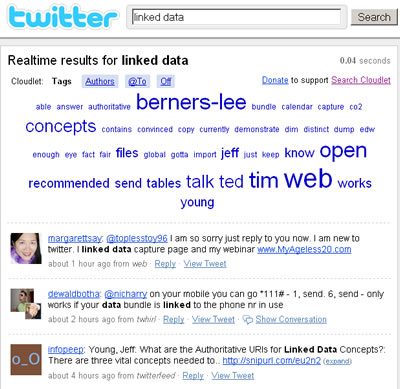 While some people work heavily on the extension of the semantic web infrastructure, like Talis Connected Commons or OpenLink´s Amazon EC2 Instantiation others have started to bring the semantic web closer to the developers and therefore to a much broader audience: They offer search facilities or Linked Data Navigators like OpenLink´s Entity Finder or DERI´s VisiNav.

Those kind of applications should not be confused with “semantic web” end-user-applications like Google´s Wonderwheel or INTSPEI´s Cloudlet: To add some semantics to existing user-interfaces can be helpful and obviously users are ready for such experiments, but of course this is NOT the innovation which the semantic web will bring but it is a very important step to be taken in parallel with the linked data initiative.

Let´s take a look at Cloudlet: This tool is an easy-to-use free Firefox extension that adds context-sensitive tag clouds to the most popular search engines and helps people more efficiently navigate through their search results. The previous version of Search Cloudlet worked with Google and Yahoo; the new version also works with Twitter. It adds Tag Clouds, Author Clouds, Recipient Clouds and Hashtag Clouds to Twitter search, Twitter user profiles and home pages. See some reviews on this popular tool.

Cloudlet is a child of the Web. INTSPEI has learned all lessons from Web 2.0 especially how to promote ideas using the blogosphere and how to identify market trends as early as possible, and it generates some added value for the users which is obvious. Sure, it doesn´t make use of linked data yet, but as a typical representative of the fast growing “semantic search evolution” it reminds me on Chris Welty´s famous insight: “In the Semantic Web, it is not the Semantic which is new, it is the Web which is new.”

Web 1.0 was the WWW without tons of network effects. Web 2.0 changed that a lot.

Linked Data is not the Semantic Web, it´s the basement for it. From a software developer´s and an IT archictect´s perspective it might seem as those two concepts were the same. But this community represents a very small percentage of all web-users.

So where is the User´s Web in the Linked Data architecture? If you´re looking at TimBL´s Linked Data principles one can clearly see that this is a “Web” for developers.

But things evolve. And some Web companies will jump on the bandwagon and will, for instance, improve their tagclouds, their semantic search, their recommender systems (Twine?) or their similarity search a lot by making use of linked data.