Danny Ayers: “The Semantic Web is the path of least resistance” 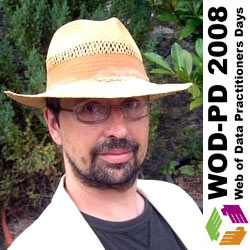 The Web of Data Practitioners Days are approaching – giving me the opportunity to do an advance interview with Danny Ayers, Semantic Web evangelist, Community Platform manager at Talis, Web of Things everything (I think). I’d just like to extract two or three points here – you can read the whole interview on our website. First something that’s noteworthy to me as it says something about the patterns of technological evolution in general:

Looking back a few years, I don’t think many people working on the Web could have predicted the remarkable rise of blogging, the revival of DHTML and ancient Internet Explorer tricks such as Ajax, online social networks, Wikis, the whole Web 2.0 thing. It’s worth noting that these developments have been consistent with Tim Berners-Lee’s vision of the Web as a system in which people are the key component.

Shifting to the Semantic Web perspective, for a long time I have believed this approach is on track simply because it offers improvements to the Web for which there are no obvious alternative techniques. Personally, I was relatively late to realise what those improvements really were – moving from a Web of Documents to a more general Web of Data. Expressed like that, and looking at existing Web architecture, the Semantic Web is the path of least resistance.

Remember? AJAX, when it cropped up and caused a big buzz in 2005, was nothing new, it was just a new term for an old thing, i.e. the Internet Explorer tricks Danny mentions (see also A Brief History of AJAX: “Browser asynchronous hacks have been possible since 1996, when Internet Explorer introduced the IFRAME tag, passing through a number of techniques such as pixel gifs, Netscape layers, Microsoft Remote Scripting, Java/JavaScript gateways, stylesheet hacks, image/cookies, and most recently the XMLHttpRequest.”)

Sometimes it takes a while until someone (society, industry, what have you) starts to notice that this or that, something, could actually be useful. Sometimes technologies that everybody thinks are silly become a huge sucess – think text messages!

And sometimes you have a great (piece of) technology and it just never really catches on, and if that is the case, then mostly because some forces in the market (trusts, monopolies, corporations who force you to use their software/technology and at ridiculous price, people who would do anyhing they can to undo the natural laws of the digital world) won’t let it happen. What happend to Video 2000 and Betamax? Nixed by JVC’s licensing strategies for VHS. Just wanted to make this point before moving on to the next quote. Danny:

Regarding possible obstacles, there are many ways the Web could suffer, probably most dangerous being interventions from national governments or commercial interests, tilting the table on which we build these systems – such as software patents and threats to net neutrality. The Web works because it’s more or less the same to everyone, everywhere.

It is going to start with a “Web of Data 101”, i.e. a low-threshold introduction given by Keith Alexander (Talis, UK) and Yves Raimond (Queen Mary University of London, UK) to Semantic Technology in the context of the Web. Here is the full program – please mind that there is a deadline for the registration also (6 Oct 2008!).